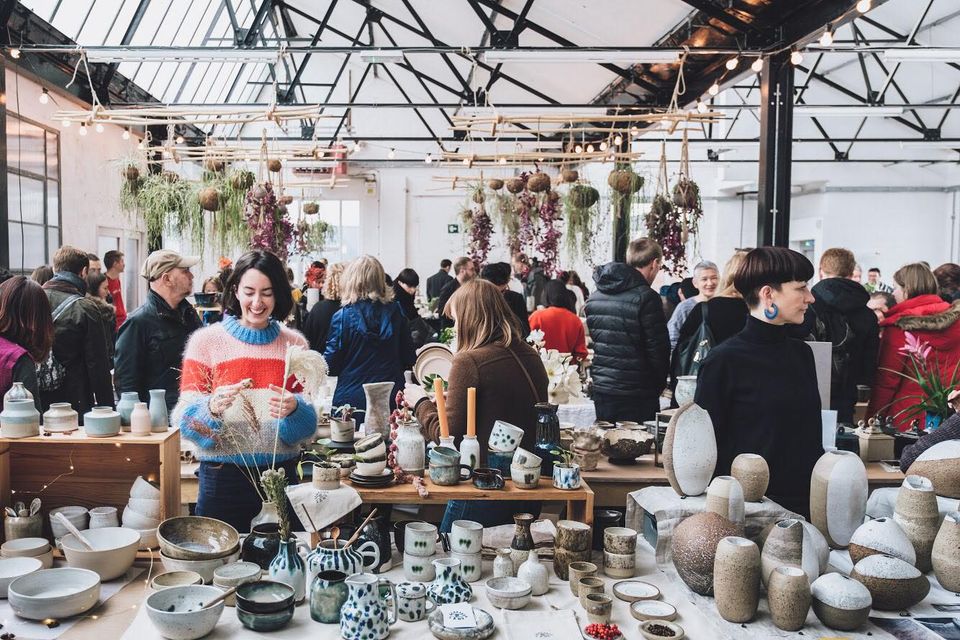 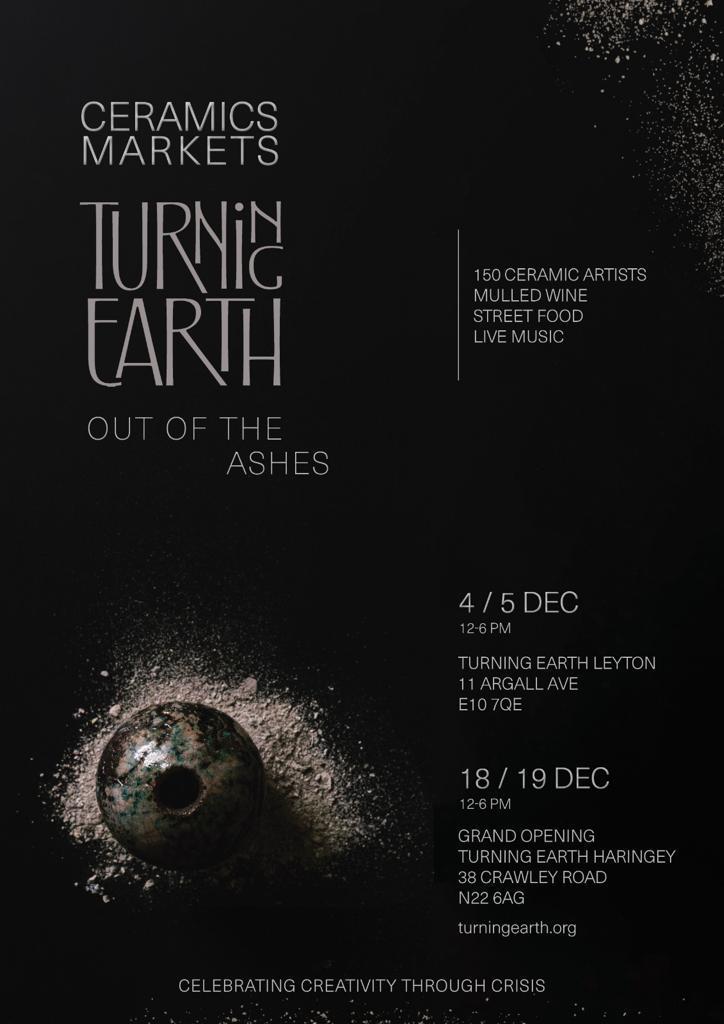 Ceramics Markets 2021/ Out of the Ashes

After a long wait, the Turning Earth Ceramics Markets are returning this year, as we get together to celebrate the creativity that comes from crisis and reflect on the changes to our lives and making practices that the disruption of the pandemic brought with it.

The pandemic has impacted our making practices in many ways: while some have had more time to reflect and to make, others have been thrown into childcare and had little time for themselves at all. Wheel throwers have tried handbuilding techniques when their studios were shuttered, while some other makers have turned to the kitchen cupboards to find tools to experiment with when they couldn't leave their homes.

And many, many ceramics lovers have been unable to see work in person - to examine or touch it, let alone meet the maker, as shopping moved online.

So, with a great hurrah, we are happy to announce that we will be holding two in-person, real-life markets this year, where our makers will be selling work made during and since the lockdowns.

As always with our markets there'll also be live music and street food and mulled wine to buy. Come and make a day of it.

Here's a list of ceramic makers taking part in the Leyton market (listed by Instagram handle where possible): 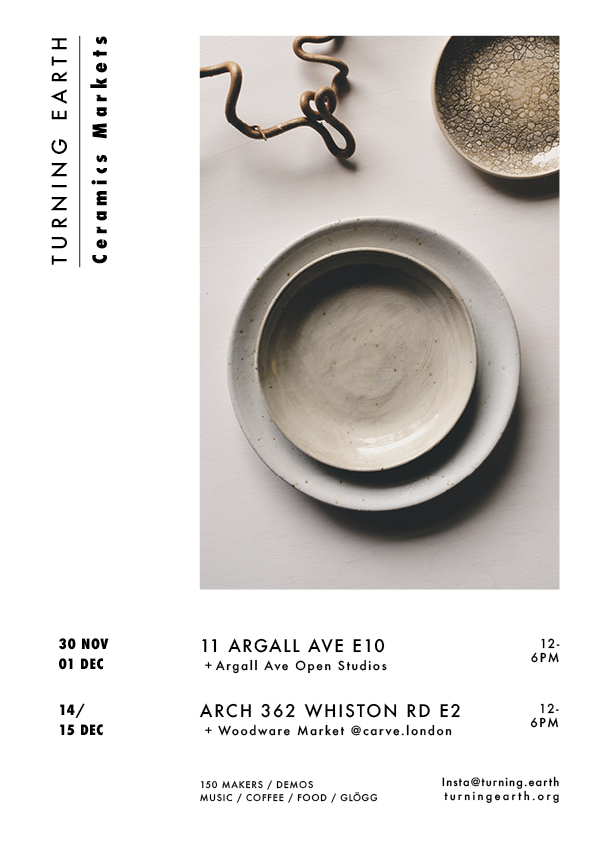 ARGALL AVE OPEN STUDIOS
During the Turning Earth Leyton market weekend you can also browse around local businesses for the third annual Argall Ave Open Studios. Sample delicious ales from Neckstamper Brewery, get some of the city's finest pastries from Pavilion Bakery, and grab some lunch at neighbouring Lighthaus Cafe. Discover furniture from creative reclaimers ThinkFOUND and luxury designer A. White Workshop, as well as  bespoke joinery from RHMB, fine woodwork from Piers Peel, and fine art framing from Dylan Shipton Frames. 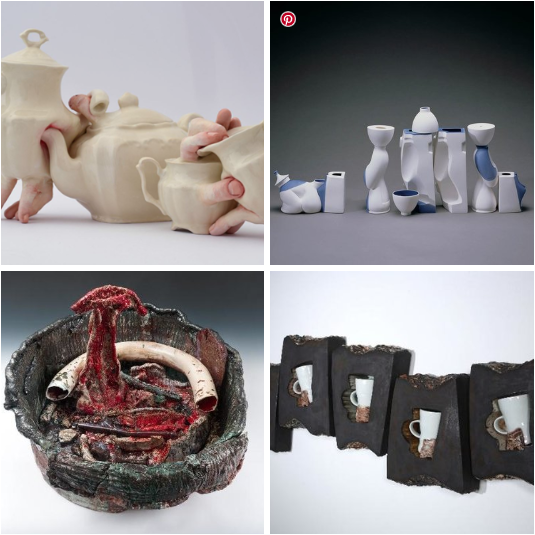 ‍The lectures are open to everyone, non-members of the studio included. 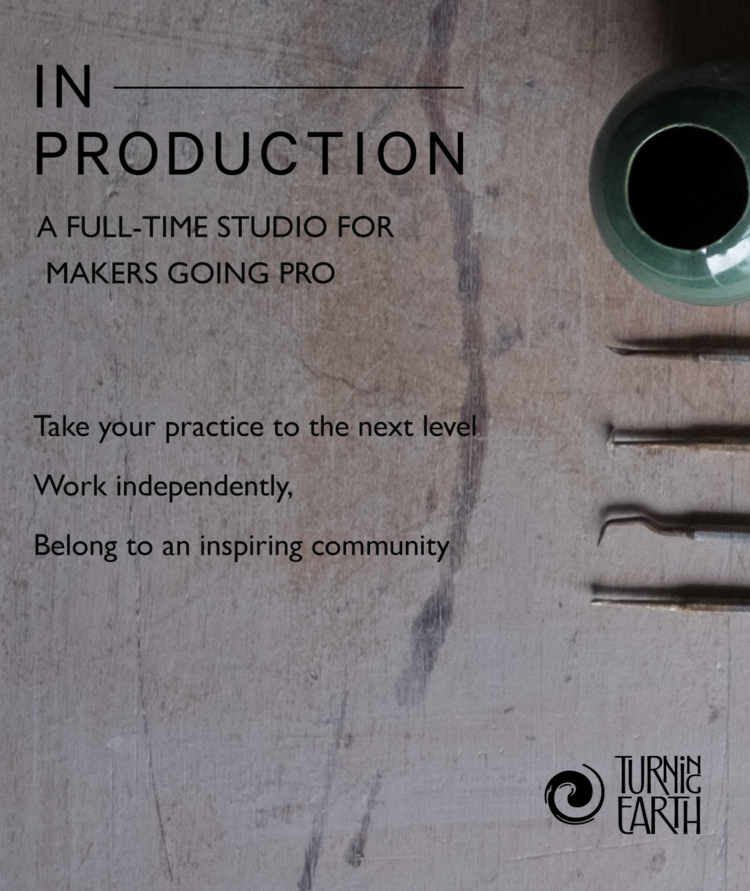 ‍In Production houses up to 25 early-carer makers, providing them with unlimited any-time access, 24 hours a week. Members mix glazes and fire their own kilns.

Moving to new premises in Lea Bridge, London E10 in April, the new studio will include top-of-the-range wheels, electric kilns, a gas kiln and a glaze spray booth. 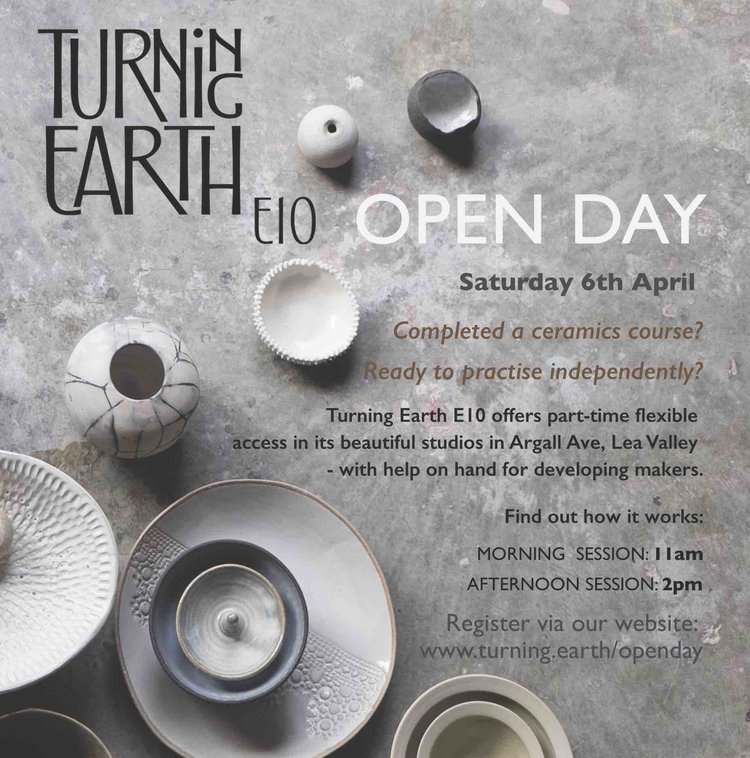 Saturday 6th April 11am and 2pm

Have you thought about becoming a member of Turning Earth, but not sure what it involves, or if you are ready?

Come along for an informal chat with our team to find out more. We’ll have tea and snacks, a studio tour and a Q&A. 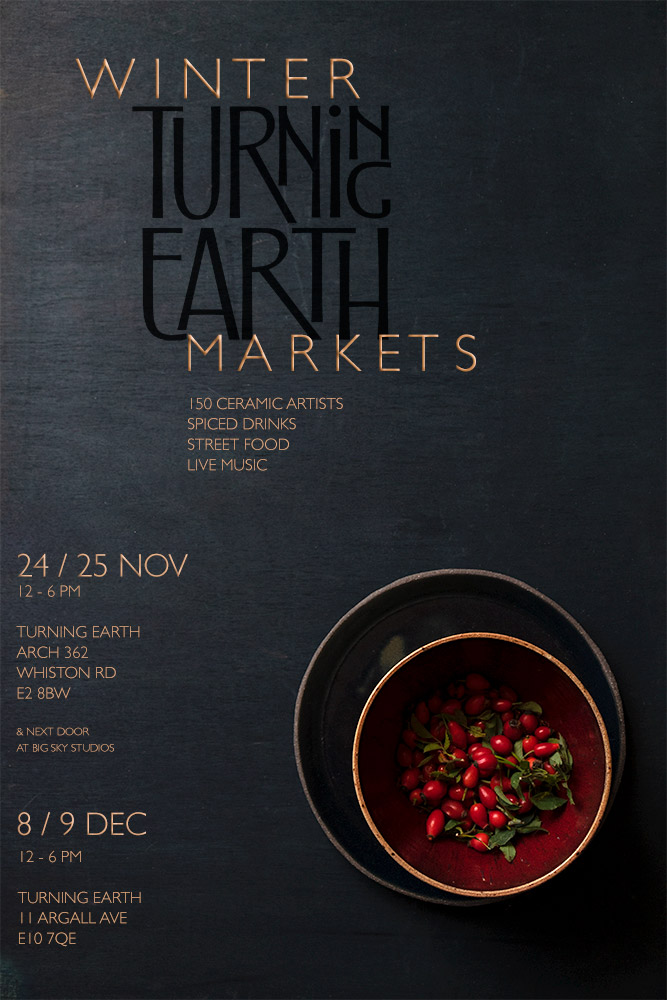 Find us:
Here’s the link on Googlemaps. Information about buses,
trains and car parking can be found on this page of our website.

150 makers, two events
Now in it's fourth year, what was once an off-the-beaten track event involving a handful of our budding artists has now become a beloved institution for the East End's community of design-lovers. 150 of London's most exciting emerging makers - enabled to begin a career in ceramics out of Turning Earth's co-work studios in Hackney and Leyton - will sell their work from two of Turning Earth's East London centres across two weekends in the run-up to Christmas.

24-25th November, Hoxton
The first event, on the weekend of 24th and 25th November, takes place in the  flagship Turning Earth centre in the railway arches in Whiston Road in Hoxton. Turning Earth has teamed up with neighbouring arch residents Big Sky Studios to accommodate the large numbers of people that now regularly attend this popular event (and who queued patiently outside Barbican Conservatory for Turning Earth's last market there in March.) Additional space means Turning Earth can bring back some old faces, including beloved former members that began their journey at Turning Earth and whose businesses have since spread across the country.

‍8-9th December, Lea Bridge
Then on 8/9 December the new Turning Earth centre at 11 Argall Avenue, Leyton, will open its doors, where another set of artists will sell their products, alongside members of Turning Earth's  professional studios, In Production, London's first professional ceramics incubator, which now houses 22 full-time making businesses. Other companies in the Argall Ave area, including furniture makers ThinkFOUND, Uncommon Projects and A.White Workshop will also open their doors for the weekend.

Live music
It wouldn't be a Turning Earth Market without an appearance from members of Balkan Klezma band The Turbans, who will be playing at the event alongside other musical guests.  The Turbans loyally return each year despite growing international renown that has seen them migrate from the fringe to main-stage spots at major summer festivals.

Food and drink
And of course it wouldn't be a Winter Market without spiced hot drinks and minced pies. Climpson will serve its world famous coffee, beans roasted around the corner in nearby Broadway Market. Turning Earth's neighbours at East London's Pavilion Cafe will be offering their delectable take on Sri Lankan street food while donating the proceeds to charity.

Made with care
Pavilion will be joined in its fundraising efforts by the many Turning Earth makers who donate special pieces and seconds at each event to raise money for organisations that reflect Turning Earth's vision of building a community with open arms - this year proceeds go to Help Refugees and the Hackney Migrant Centre.

All electricity used to fire the kilns at Turning Earth now comes from renewable sources. The studios will encourage shoppers to play their part by asking people to bring in their old bubble wrap to be reused as packaging. 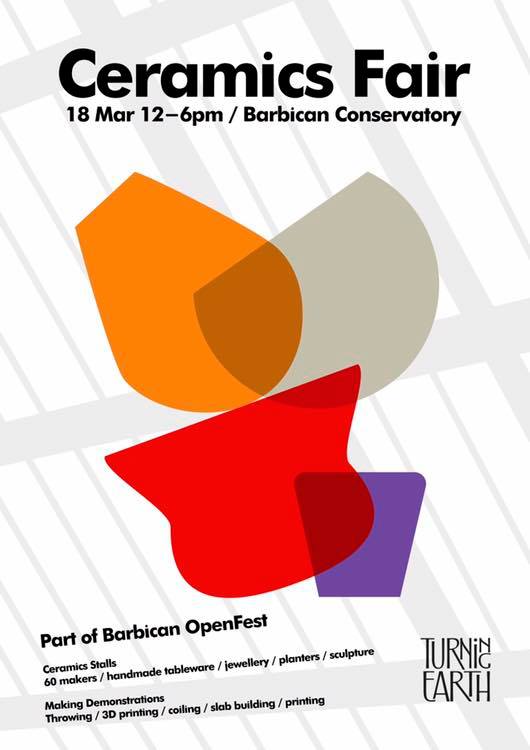 On Sunday 18th March, 60 contemporary artists from Turning Earth will gather to sell their work in the unique setting of the Barbican's Conservatory Terrace and Garden Room.

Beautifully crafted tableware and one-off sculptural and conceptual pieces will be available to buy directly from their makers.

Throughout the day, artists will demonstrate their techniques in various locations along the Conservatory trail. There will also be opportunities for visitors to have a try at working with clay themselves. 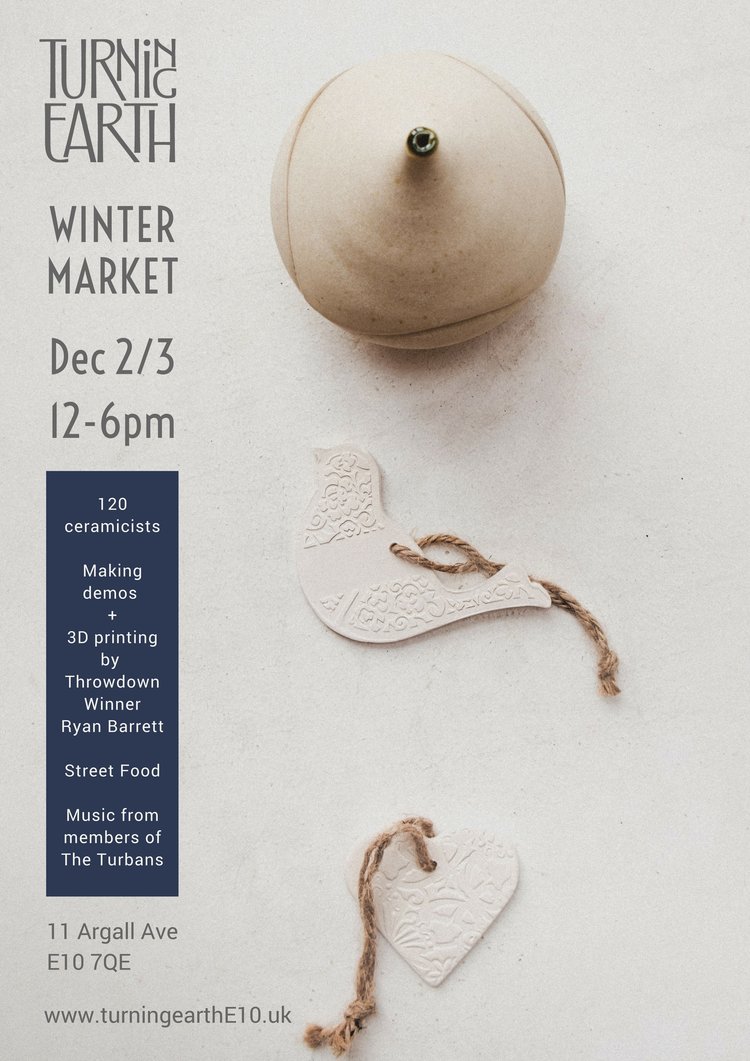 It's going to be the biggest Turning Earth studio sale ever...

120 makers from both studios, and the businesses who form our accelerator, In Production will be gathering together to sell their work.

The other making businesses in the Mentmore studios building (of which Turning Earth E10 is part), will be opening their doors to the public as well - including Wilder Creative, ThinkFound, Uncommon Projects and Pavilion Bakery.

The winner of The Great Pottery Throwdown, our maker Ryan Barrett, will be demonstrating 3D printing in ceramics using a machine he made in his shed!

Browse and buy new work, listen to live music from members of Turning Earth's favourite band, The Turbans, and have a craft beer with the makers. There'll be Breton crepes and galettes on sale, and a full lunch menu at Lighthaus, the cafe downstairs. 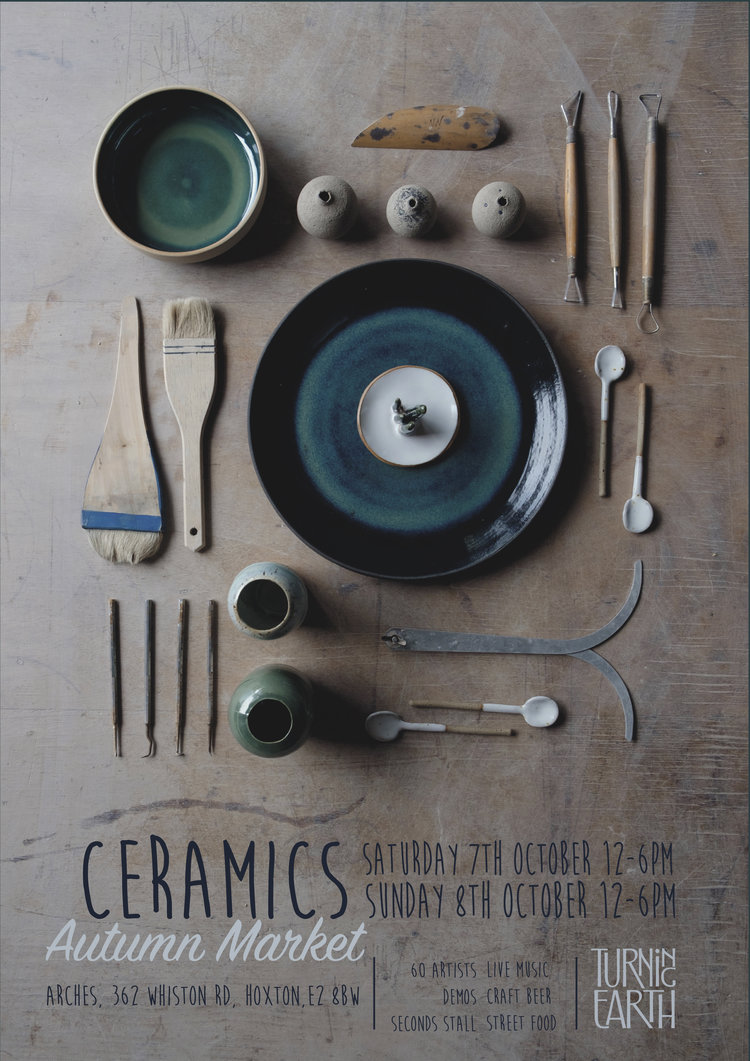 After a break while the studio expanded (during which one of our makers won The BBC's Great Pottery Throwdown and several others found fame on Instagram), the popular destination for stylists, foodies and lovers of all things handcrafted throws opens its doors to the public again.

60 up-and-coming makers from the studio will be selling their work and demonstrating making techniques in our beautiful arches in Hoxton.

Browse and buy new work, listen to live music and have a craft beer with the makers. Hanoi Ca Phe will be providing Vietnamese street food. All this to a soundtrack of live music from the folks behind the popular East London music night, Woodburner. You never know, maybe you will pick up a piece from one of the ceramics stars of tomorrow. 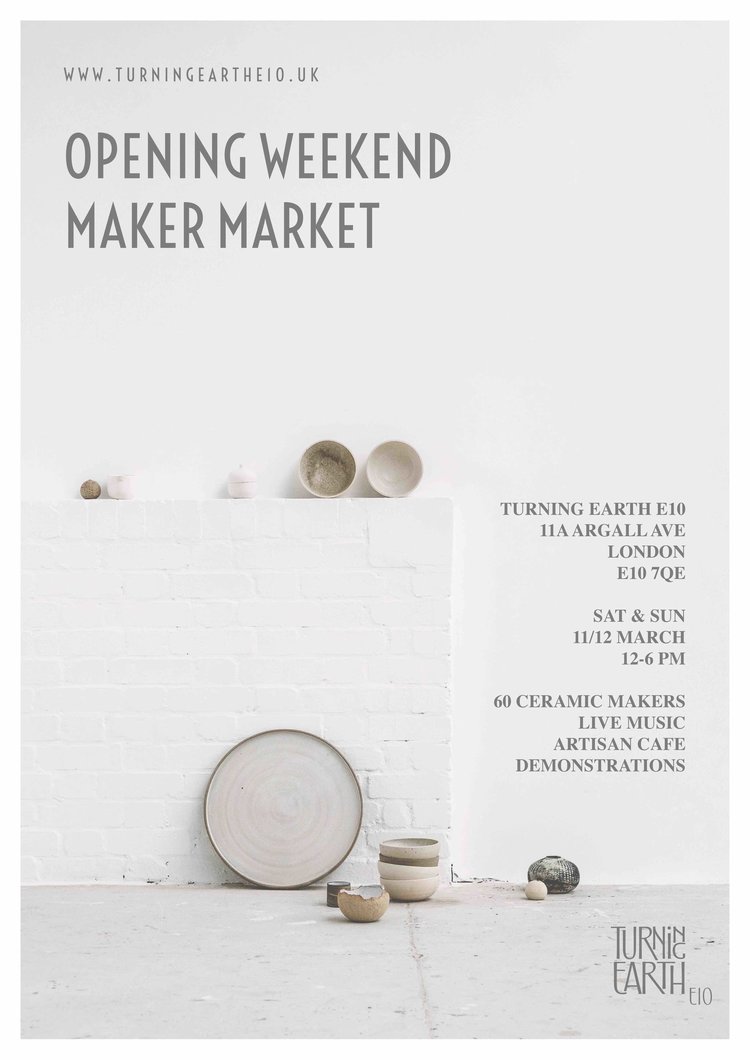 Turning Earth is celebrating the opening of our second studio in E10 over the weekend of 11th and 12th March. To celebrate, over 60 Turning Earth artists, past, present and future, will gather together to sell their work in the beautiful new space, located in the newly renovated Lea Valley Works.

There'll be food from LightHus, the beautiful Skandinavian-inspired cafe opening on the downstairs floor at the end of March, live music and a celebratory atmosphere.

Come and join us!

Learn about our charity fundraising at the sale.